A game of dice - dayakattai 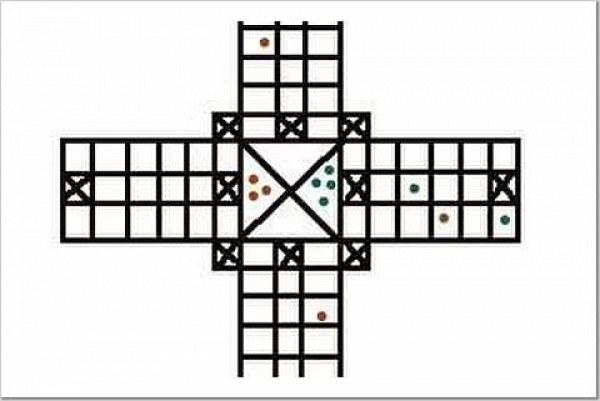 Excuse my attempts at Tamil here but i shall try to make it sound as authentic as Iyer athu tamil.

Strategy, fun and one of the few things that really brings an iyer house hold together is the amazing game of dice. Its one of the most entertaining games i have ever played, with as much noise thrown in as linguistical enhancements to one of the ancient dialects of tamil. Yes, its entertainment for the next two hours from when the family gathers to play this deadly game of strategy, slaughter, war and victory.

Post brunch, after a filling 'sapadu'(meal) at 10.30 am, the family gathers together, mainly the men folk, the kids stricktly above the age of 4 (i guess) and of course our very famous pati(post madi business and puja) while thatha, the man of the house continues to snore in his easy chair hoping for silence. Yeah, so much for a peace in the house. haha

The number of people in the game mounts up to a good number like 12 odd people and trust me there is room for all as long as we end up in an even figure. To get this count right few strong attempts are made on the daughter in laws of the house to please join in to at least roll the brass sticks if not think strategy.

There is someone assigned to every position, two adults to think of strategy with pati in the lead, one uncle to play shakuni and invariably get those unattainable daayams (number one on the brass sticks) no matter how much you bid against it. The kids of course, being all equal get to roll the dice and hope to meet the expectations of all the adults around them. There are other beliefs too that surround this traditional game. Its normally played by the women of the house hold after the father-in-law has left and interestingly wiped off before he returns. Interestingly, the women folk take to this game more often where they send all the kids to schools, hubbys to work and sit back and play after all the house hold activities are over. My house, was a slightly diluted affair to the orthodox brahmin culture. The main players were MEN.

Daayam, or the count of 'one' on the ancient brass sticks, is your ticket to enter the game. This of course is hard to get. Its a mind set that takes a toll if the game has already begun and you still have not put your daayam, to open your innings and hence participate. It can be highly frustrating for you might just never get it till about half the game is over, your team has quite learnt to live without you but you are the irritant the other team is cashing on keeping their coins bravely on the "ambalam" or passage since they are so sure you will not be able to kill them.

The concepts pretty simple. Both teams have 6 coins each - traditionally represented by almonds, kishmish, "paaku", ground nut or the like. We move to stones, buttons, and plastic "ludo" coins when we cant lay hands on the appropriate "kaay". Kaay as they are typically called since they are the raw fruit yet to ripen which will happen only when the coin exits the board after covering the long journey back home through the "kattam" - the board.

Lots could happen along the way home, for one, your kaay can simply get killed when the opponent numbering 6 people by now, aggressively looking down into the game making calculations in not just the massacre of your single "kaay", but killing a few other less fortunate "kaays" that found themselves on the "ambalam" in the course of the game. That apart the calculations end in protecting their own kaays when they safely move them to a "malai" or home along the way. Interestingly when the opponent occupies a malai, there is no room for your coin, in short its called "malai manga".

By now the perssure is mounting furiously, while the opponent gets excess points or"pandyam" by putting - eer aaru, muu anji, iru panandu, iru daayam, naalu - translates to two sixes, three fives, two twelves, two ones and one four. Now this is a phenomenal "pandyam" where you can move any kaay anywhere, and kill any one you wish and still move your kaay to a home on the way if you got lucky. Pati is behind you with strategy that never met your eyes and when you see at least three of the opponents "kaays" go back in, to start the round again, well its a loud uproar piercing the air drowning thatha's snore into the din.

But well now, they will come back, the horror of massacre hits first, then the anger, the then aggression and the opponent comes back double, killing with a bigger blow, shooting as many kaays of your way back home as they possibly can. By now, even the most bored daughter in law sits up to view the game, the kattam, half wiped out by the deft hands that just flew across moving the coins so swift, that you dont even know what just went by. Every thing settles, the game goes on, one verses one coin - now in the ripe stage of "pazham". Killing a pazham is another thrill altogether.

The pain that the opponent need to go through to take the kaay across the kattam to bring it home without having it killed and elevating it to a pazham is a joy for anybody but him. Once the pazham has reached the ripe stage and has come home, there is the last lap.

Its a murderous position called "dokkai" where its the last step to "ripe fruit", and yet it can be killed. This hurts, being killed at this stage really hurts, and its over whelming joy for the opponent who by now are raising themselves very sure that its the end of the game. getting that single daayam, can take a minute or a century, but every one, just everyone waits for it. Its the defining moment or victory or failure, the anticipation is so high that tiffin and caapi can seriously wait.

finally the last roll of the dice, and "dddddddaaaaaaaaaaaayyyaaaaaaaaaaammmm". Six guys jump up, cant belive their eyes, jump around in ecstasy while 6 others sit silent looking into each others faces. The winning team of course takes the final pazham and consume it literally - and what a fine fruit that was!!!

The joy of having that particular kishmish/ almond/groundnut is different. It tastes as good as any fruit of victory will. Nobody even considers that the kishmish has been rolling along the floor for the last one hour, No, its the most delicious fruit one could have. This is crowned with the victory dance, the grand finale - i think its only at my house - where the team gathers, old and young, tall and short, male and female, hopping on the floor holding each others shoulders!!! And what a dance that was! you dont need to be intoxicated for this, just the trill of winning dayakattai is more than enough to send you on the high!

Great ancient game. Truely worth while.