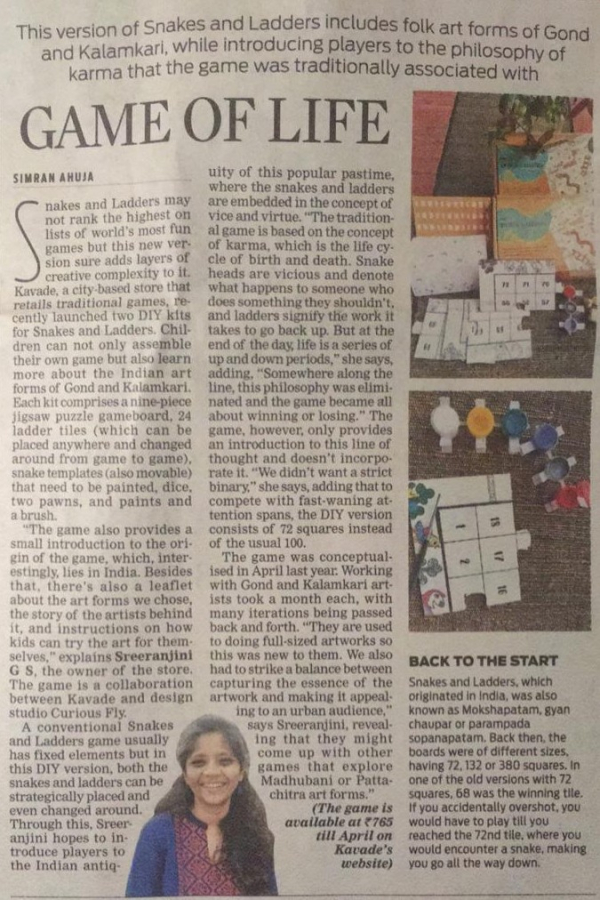 This version of Snakes and Ladders includes folk art forms of Gond and Kalamkari, while introducing players to the philosophy of karma that the game was traditionally associated with

BENGALURU: Snakes and Ladders may not rank the highest on lists of world’s most fun games but this new version sure adds layers of creative complexity to it. Kavade, a city-based store that retails traditional games, recently launched two DIY kits for Snakes and Ladders. Children can not only assemble their own game but also learn more about the Indian art forms of Gond and Kalamkari. Each kit comprises a nine-piece jigsaw puzzle gameboard, 24 ladder tiles (which can be placed anywhere and changed around from game to game), snake templates (also movable) that need to be painted, dice, two pawns, and paints and
a brush.

“The game also provides a small introduction to the origin of the game, which, interestingly, lies in India. Besides that, there’s also a leaflet about the art forms we chose, the story of the artists behind it, and instructions on how kids can try the art for themselves,” explains Sreeranjini G S, the owner of the store. The game is a collaboration between Kavade and design studio Curious Fly.

A conventional Snakes and Ladders game usually has fixed elements but in this DIY version, both the snakes and ladders can be strategically placed and even changed around. Through this, Sreeranjini hopes to introduce players to the Indian antiquity of this popular pastime, where the snakes and ladders are embedded in the concept of vice and virtue.

“The traditional game is based on the concept of karma, which is the life cycle of birth and death. Snake heads are vicious and denote what happens to someone who does something they shouldn’t, and ladders signify the work it takes to go back up. But at the end of the day, life is a series of up and down periods,” she says, adding, “Somewhere along the line, this philosophy was eliminated and the game became all about winning or losing.”

The game, however, only provides an introduction to this line of thought and doesn’t incorporate it. “We didn’t want a strict binary,” she says, adding that to compete with fast-waning attention spans, the DIY version consists of 72 squares instead of the usual 100.

The game was conceptualised in April last year. Working with Gond and Kalamkari artists took a month each, with many iterations being passed back and forth. “They are used to doing full-sized artworks so this was new to them. We also had to strike a balance between capturing the essence of the artwork and making it appealing to an urban audience,” says Sreeranjini, revealing that they might come up with other games that explore Madhubani or Pattachitra art forms.”(The game is available at `765 till April on Kavade’s website)

Back to the start

Snakes and Ladders, which originated in India, was also known as Mokshapatam, gyan chaupar or parampada sopanapatam. Back then, the boards were of different sizes, having 72, 132 or 380 squares. In one of the old versions with 72 squares, 68 was the winning tile. If you accidentally overshot, you would have to play till you reached the 72nd tile, where you would encounter a snake, making you go all the way down.

Rate this item
(0 votes)
Be the first to comment!
Tweet
Read 89 times
Published in: Kavaḍe in the News