Marching ahead with simplicity 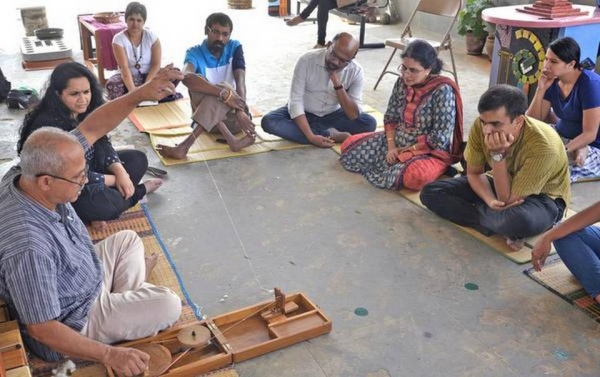 The art of spinning is coming back, thanks to the efforts of people like Madhav Sahasrabudhe

There is an air of peace and calm as you walk on to the terrace of Kavade Attic on 1st Main in Sheshadripuram. The cosy ambience is set up with cane mats on the floor and lots of charkhas (spinning wheels). Madhav Sahasrabudhe, a mechanical engineer from Pune, catches your eye.

Dressed in a khadi kurta and trousers made from the yarn he spun, the man is engrossed in spinning. Madhav is in the city for the recently-concluded two-day spinning workshop, organised by Kavade Attic. As he spins, the spinner talks about the art and the calming effect it has on one’s mind.

How did he take to spinning? “When I worked as an engineer, I met a man named Dada Bhonsle, a landlord who worked every day for two hours on his farm and consumed only what he grew. Touched by his lifestyle I went to live with him for a while to learn and discovered he was also into spinning. He would spin yarn, not just for himself, but for his family. That is how I took to spinning eight years ago,” says Madhav as his nimble fingers effortlessly create the yarn from fluffy balls of cotton.

“Watching Bhonsle making yarn made me realise spinning is connected to one’s lifestyle. It makes you realise the effort that goes to the services you take for granted. For instance, electricity. You turn a switch and the light comes on. You don’t realise the number of hands that have toiled to make it so easy for you. Similarly, for the yarn too, the farmer works hard, grows the cotton and collects it. He has toiled to cultivate it, someone else processes the cotton, you spin it and give it to the weaver, who in turn makes fabric. This shows there is an independence and one should understand that,” adds Madhav as he tightens the yarn.

He adds that what is true for spinning is true for all cottage industries and life in and around villages. “These chains use only natural resources, which are renewable. Now that the world is heading to a future with market-driven products, we have to think about the energy we can save and reduce our carbon footprint. The process of spinning is supported by rain and human labour and you can fulfil your basic need of clothing without resorting to any additional form of external energy,” explains Madhav, who spins for at least an hour every day and comes up with “40 metres” of yarn a year.

This, he says, has made his life simple as he gives the weaver the yarn, who either weaves a fabric for him or gives fabric in exchange. “All you have to do is give him his making charges. Forty meters of yarn is sufficient for a family,” adds the spinner. He then gives each of us a charkha and shows us how to spin. “Don’t think much. You have to learn to let go. Don’t hold the cotton tight either,” says the man as he demonstrates the craft. Surprisingly, most of us manage to spin yarn of varied textures – some thick, some thin, and some a blend of thick and thin.

“Don’t worry about the texture. The best part of spinning is it is easy as you can pick it up in half an hour. And no yarn goes waste either. If it is thin, the weaver will use it to create saris, dresses and if it is thick or a blend of thick and thin, it is used for tapestry, towels, napkins, rugs and so on. So there is no such thing as bad yarn. Only caution to take is to make it strong by twisting the yarn once you have managed pull it out of the cotton,” he says and adds “sky is the limit for improvisations in this,” states the man, who then gives us a brief peek into the history of the portable version of the charkha he uses. “During Gandhiji’s time, the spinning wheel was bigger and heavier. They were in Yerawada jail, Pune, and realised they wanted to make smaller spinning wheels instead of carrying the heavy ones. That is how the portable version came to be and is also called Yerawada chakras, which later came to be known as charkha,” explains Madhav, who adds that there is a need to keep this art alive for the next generation. “I believe people are fed up of the market-driven lifestyle and are looking for some simplicity. So I would say we are going, not back to the past, but ahead. We are preparing to face the future, say 50 years and ahead with simplicity.”

Rate this item
(0 votes)
Be the first to comment!
Tweet
Read 1848 times
Published in: Kavaḍe in the News